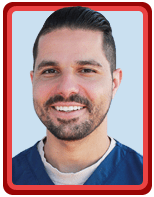 Dr. Wael Turki was born in Los Angeles, California. He became interested in Dentistry after an accident which resulted in fractures of both his front teeth. The recovery process sparked his curiosity and he decided to become a chemist to understand the materials better. This experience led him to choose a career in Dentistry. His desire is to help make his patients happy, just like his Dentist did for him as a child. Dr. Turki received his degree in Biochemistry at California State University Northridge in 2010. He continued his education at Western University of Health Sciences and earned his DMD in 2015. After finishing school, he served our country in the Army as a Dental Officer.

In his spare time, Dr. Turki enjoys spending time outdoors with his wife, Desireh and their two children- Isla and Dean.