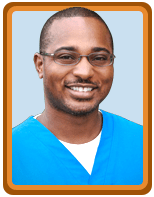 Dr. Lewis Cook was born and raised in Kansas City, Kansas. He graduated from The University of Missouri Kansas City Dental School in 2006 and obtained an (AEGD) residency from UMKC also. He became a Fellow in the Academy of General Dentistry in 2009 and earned a Masters in Business Administration from Oklahoma State University.

Lewis lives in El Paso and enjoys spending time with his wife, Chivonne, and two children, Lauren and Lewis.